HOW worried should we be about the world economy and, by extension, Britain’s recovery? Is it time to batten down the hatches, or is it just a pause for breath? Should there be emergency action to boost global growth; a Keynesian fiscal boost, as advocated by Larry Summers, the former US treasury secretary?

Concern over the global economy has been building for some time, most notably in worries over China. Even in America, where the majority on the Federal Reserve’s decision-making committee is keen to get on with raising interest rates, there has been disappointing data.

Such concerns have been brought into sharper focus by the latest forecast from the International Monetary Fund. The IMF’s forecast for world growth this year is 3.1%. Given how much of 2015 has gone, it is as much an assessment as a forecast.

Growth of 3.1% does not sound all that bad. In Britain it would be very acceptable indeed. But for the world economy, it is not good.

The normal or “trend” growth rate of the world economy is 4%, or at least it was before the financial crisis. The IMF’s definition of a world recession is when growth drops to 2% or below. So the current situation sees the world perched, perhaps precariously, halfway between normal expansion and recession.

Not only that, but after three unspectacular years from 2012, in which the world economy grew by 3.4%, 3.3% and 3.4% respectively, this year’s 3.1% is the worst since 2009, when there was no growth: the weakest postwar year. Growth this year matches 2008, when the world was succumbing to the crisis.

And, for once, it is easy to see where the problem lies. Advanced economies — North America, western Europe, Japan and a few other parts of the world — are gradually picking up. This year’s 2% growth for advanced economies is nothing to write home about, but it is better than we have been used to. In 2012 and 2013, growth was barely above 1%, largely because of the eurozone’s woes.

Rather than advanced economies, the emerging world is the problem. China is slowing. Of the Brics (Brazil, Russia, India, China), two are in recession this year and next. The IMF has Russia shrinking by 3.8% and 0.6% in 2015 and 2016 respectively, and Brazil by 3% and 1%.

For emerging economies as a whole, growth this year is put at 4%. That is the weakest since 2009, but does not tell the full story. In 2009, emerging economies carried the world through the crisis. While advanced countries saw their economies dive — gross domestic product plunging by 3.4% (including a 2.8% fall in America and 4.3% in Britain) — emerging economies grew 3.1%, including a remarkable 9.6% expansion in China.

Growth then accelerated in emerging economies to 7.5% in 2010. That was the high water mark. Growth has slowed every year since, and this year’s 4% is barely half what was achieved in 2010.

Even that isn’t the full picture. In the past decade and a half, emerging economy growth has always significantly exceeded that of the advanced world. Sometimes it has been three times advanced-economy performance, sometimes more.

It was this that led me, and others, to conclude we had moved into a new era for the world economy. In the 20th century two-thirds of growth was from advanced economies, one-third from the emerging world. In the 21st century those positions had been reversed, with emerging economies the new locomotives, responsible for two-thirds of the world’s growth.

Has that come to an end? Even the more muted growth in emerging economies this year, of 4%, is twice the 2% expected for advanced countries. But that is the narrowest gap since 2000.

Andy Haldane, Bank of England chief economist, has talked of the emerging market crisis from 2015 onwards as part three of a trilogy that began with the “Anglo-Saxon” financial crisis of 2008-9 and transmuted into the eurozone crisis of 2011-12. Though the Bank’s minutes on Thursday were more guarded, when interest rates were left unchanged at 0.5% for the 79th successive month, the emerging market slowdown is clearly a factor weighing on it.

Does it mean a return to the global economy of the 20th century, in which the West once again calls all the shots?

There is no doubt emerging economies face challenges. In some ways they are victims of earlier success, in that some of the capital that flowed in in anticipation of strong growth forever is now flowing out again. This is similar to what gave us the Asian financial crisis of 1997-8. Bond yields in emerging economies have risen.

In some respects, the story is simple . As long as China was growing very strongly, it produced a rising tide that lifted a lot of boats. Neither Brazil nor Russia can remotely be said to be well-run economies, and that applies to much of Africa, but as long as China was pushing up oil and commodity prices, growth in these commodity-rich economies was guaranteed.

China’s slowdown has exposed underlying weaknesses. When China sneezes, many countries catch a cold. But we should not be too gloomy. I am with Capital Economics, which calls a new report “One extreme to the other”. “Having been too optimistic on the outlook for the emerging world over much of the past five years, the consensus has now shifted too far in the other direction,” it says.

I’m also with the IMF. It thinks this year will be the low for the emerging world, with growth picking up to 4.5% next year, building to 5.3% by 2020. Something like normal recent service will resume.

That, of course, is not guaranteed. One thing that looks odd in this context is an early rise in US interest rates. Even if the US economy was racing away, which it is not, there would seem to be a strong case for holding fire because of what is happening outside America. We shall see.

PS: The death of Lord (Geoffrey) Howe, just a week after the passing of Denis Healey, means the loss of two big chancellors in a very short time. I had a lot of time for Howe, whom I got to know 3½ decades ago, and whose achievements were consistently underappreciated.

From his first budget in 1979, he was a tax reformer, cutting income tax and paying for it by raising VAT. His boldest move, perhaps, was the removal of exchange controls, within six months of taking office. He held his nerve in 1981 when, under an onslaught from the economic establishment, he unveiled an austerity budget at the trough of the recession. The economy he handed over to Nigel Lawson, two years later, was in good shape.

A few years ago, I made him the best chancellor of the modern era, having inherited an economy in terrible shape, introduced a series of much-needed reforms and left it clearly on the mend. Though he had to put up with interference from next door, he handled it well. Even the perception that he was a bit of a softie was useful. As I put it in my recent book Something Will Turn Up: “His mild-mannered image was useful, indeed necessary in tough times, taking the hard edges off what could have been an even more hard-edged Thatcher government.” 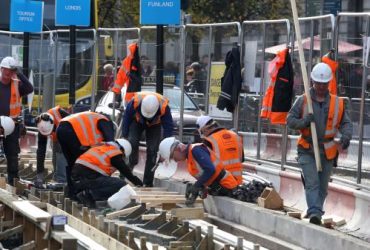